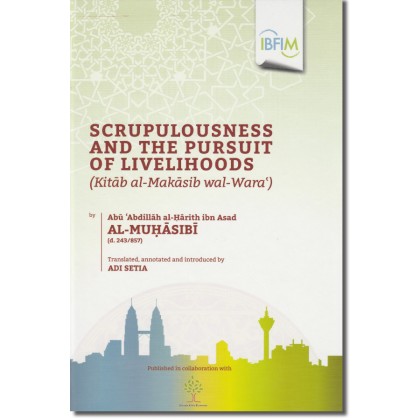 It is rare nowadays to see the religious virtues such as scrupulousness (wara‘), detachment (zuhd), reliance (tawakkul) and obedience (ṭā‘ah) properly and intelligently discussed, taught and elaborated in in a mode of discourse that connects them meaningfully and intimately to the manner in which people should go about in their daily lives in the course of their mundane pursuit of livelihoods.

In this regards, it is intellectually and spiritually refreshing that the earliest systematic texts on the cultivation of the religious and spiritual virtues in Islām (now called the science of taṣawwuf) have already firmly embedded those virtues seamlessly into the real-world contexts of commerce and the vocational arts.

One such early Islamic text is the Kitāb al-Makāsib wal-Wara’ in which the august author, al-Muḥāsibī, superbly articulates the dynamic balance and proper relation between the outward pursuit of livelihoods and the inward cultivation of the spiritual virtues, such as tawakkul, Wara’ and ṭā‘ah. He shows convincingly that once this balance and relation are understood and put into regular and consistent practice, then it can be seen that the cultivation of the inner virtues is compatible with engagement in the daily life of the world, and even demands that engagement for their expression, and hence, realization, in actual conduct.